Built in the suburbs (“fuori popolato”) along the municipal road to Quartucciu (today via Dante), in a vineyard of Cav. O. Melis, the building functioned as an slaughterhouse from 1901 to 1968. It was designed by Eng. A.F. Loi, to whom the Municipality had entrusted the project since 1889. The sadly famous storm that hit Quartu in October of that year, postponed its implementation and led to the reduction of the sum allocated for the project (from 27,000 to 18,000 lire) and the consequent limitation of both the area to be built (only 1854 square meters of the initial 4,000) and the planned ornamentation.

The building was enriched only by a few elements in Gothic style (pointed arch windows, ogival arches), but in its simplicity it was elegant and, above all, functional and in accordance with the hygienic requirements of the time. The structure develops symmetrically with respect to a central axis and has a wrought iron entrance gate on the façade, flanked on the left by the windows of the room reserved for the caretaker and, on the right, by those of the customs offices and the health officer.

At the end of the facade there are two large gates, which allowed the access of the wagons inside the slaughterhouse. In front of the entrance there were two communicating rooms, one used as a court for cattle and the other as a slaughter room. The latter was decorated with a cornice along its entire perimeter and had 6 doors, closed by shutters to keep the environment cool and not to alter the meat. In the square, originally paved, there was a well and, along the walls, on both sides, courtyards and canopies for the cattle to rest. At the end, in front of the slaughter room there is the pelandra, where the skins were tanned. The building is one of the most significant from an artistic-functional point of view: it has 4 ogival arches on the façade, supported by small brick pillars and decorated with fan-shaped ashlars on the top. A fifth arch on the right side was intended for the entrance of the beasts.

Today the Antico Macello is the seat of the Historical Archive and the Children’s Library. 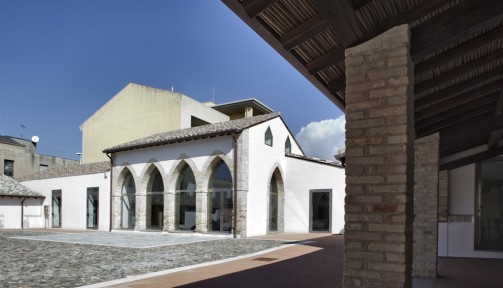