The Regional Natural Park Molentargius Saline, established by Regional Law in 1999, is one of the most important wetlands of international value in Europe. It includes basins of fresh water (Bellarosa minor and Perdalonga), salt water (Bellarosa major or Molentargius and Quartu pond) and a plain of sandy origin (Is Arenas). The main characteristics that make it a unique ecosystem in the world are its extreme proximity to two of Sardinia’s major cities, Cagliari and Quartu, and the presence of areas with different salinity that favor a rich variety of plant and animal species, including the flamingo that nested here for the first time in 1993. The Molentargius pond is part of a system of ponds and lagoons formed in the Campidano plain from 75,000 up to 18,000 years ago and was born in an almost circular depression of arenatic sediments. The Pond of Quartu, of a backdune nature, was formed further south separated from the strip of land of Is Arenas and close to the Poetto beach.
In the past, summer drainage formed a natural saltpan and it was man’s interest in salt that was the driving force behind the history of this ecosystem. The Bellarosa Minore and Perdalonga, on the other hand, were born as rainwater expansion tanks and in the post-war period they also took on the function of a basin for collecting white and black wastewater. In 1985 the overflowing of the Bellarosa Minor waters in the Molentargius caused the closure of the salt pans for hygienic-sanitary reasons. The restoration has allowed the regulation of the hydraulic systems and the construction of an innovative natural phyto-purification plant which, when fully operational, will supply the fresh water ponds with the right amount of nutrients. Close to the entrances to Cagliari and Quartu S. Elena, green areas have been created to create a barrier to the pressure exerted by the municipalities on the Is Arenas territory, making them an ideal place for walking and cycling. 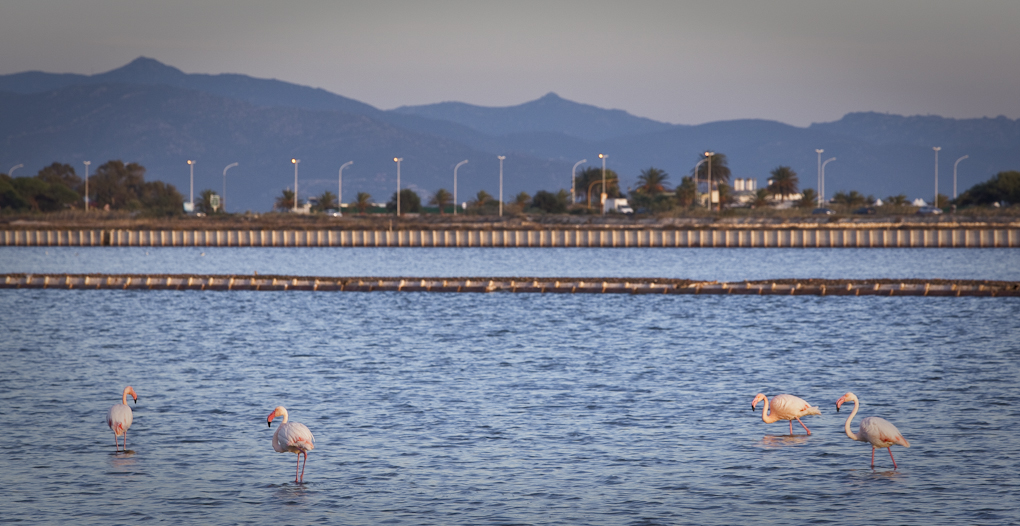