On a flat area, near a watercourse and a short distance from the sea, a Neolithic settlement developed in the second half of the 5th millennium (around 4300 BC) of which the remains of elliptical huts, partially sunken into the ground, have been found. With the establishment of the Ozieri Culture, in the second half of the 4th millennium (3500 B.C.) a larger village developed on the area of the previous settlement, consisting of quadrangular huts, connected to an area of megalithic worship attested by a menhir and two sacrificial tablets. Near the larger slab, there are two spheroidal stones of uncertain meaning ( maybe representing the sun and the moon), but of undoubted sacred value, found by chance by a farmer at about 300 meters from the archaeological area. Between the end of the Neolithic and the beginning of the Eneolithic (about 3000-2800 BC), with the rise of new cults and more complex rituals, it was decided to build an altar called “Red Temple” because of the presence of walls plastered and painted with ochre. This first monument consisted of a quadrangular platform, preceded by a ramp, on which was located a cell whose perimeter walls, the entrance and parts of the floor are preserved. Later, the people who lived in the area during the Eneolithic, probably following a fire, built a second, larger building on the “Red Temple” called the “Stepped Temple”, dating back to the early Eneolithic (Culture of Filigosa-Abealzu, 2800 BC or for some around 2600 BC). The altar, unique in Sardinia and in the Mediterranean area, is built with large blocks, has a truncated pyramidal shape and is preceded by a ramp. There is no trace of the cell, presumably present on the top; in the area to the east of the monument there are remains of housing structures referring to the culture of Abealzu (2600 B.C.), including a multi-cellular hut called “Wizard’s Hut”. 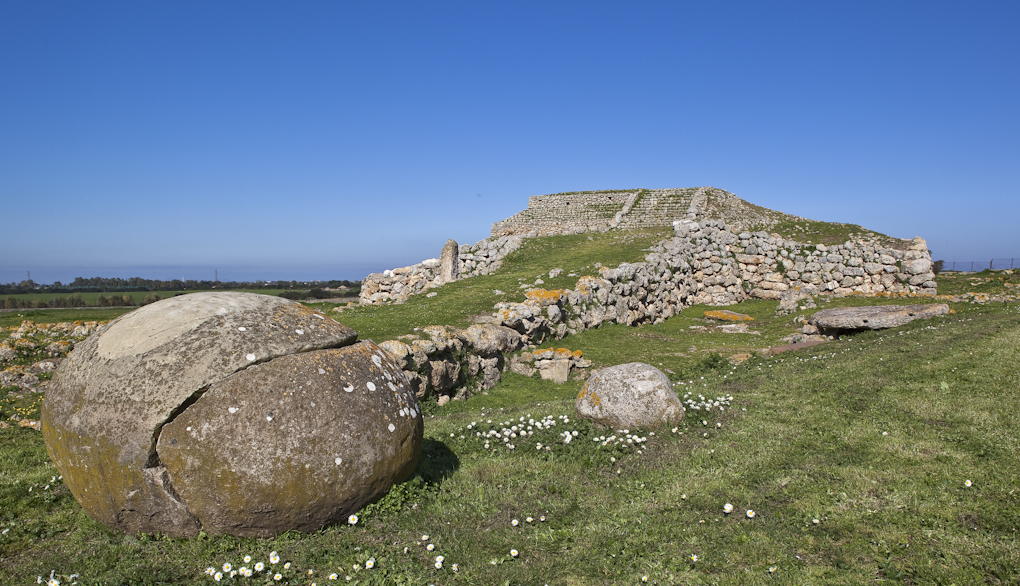