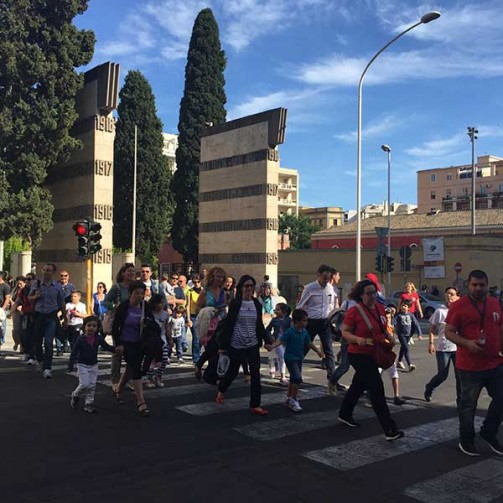 Monumenti Aperti is the most important festival dedicated to the promotion of the Sardinian cultural heritage.
The event is organized by the non-profit association Imago Mundi, which started it in 1997 thanks to the passion and civil commitment of a group of university students. Every year, more than fifty municipalities take part in the event, involving at least fifteen thousand students of all ages in tourist-guiding activities. During the weekends between April and May over six hundred monuments are opened to the public.

Since 2013, the event has also landed on the Italian mainland, in Piedmont, and especially in those territories described by Cesare Pavese and Beppe Fenoglio in their novels. In autumn 2017, Ferrara joined Monumenti Aperti’s network.

Besides the usual and completely free guided tours, other special itineraries have been specifically created for children and disabled people, the latter in collaboration with the pertinent associations. A rich program of side events, musical animations, sound installations and theatrical performances around the city’s squares and monuments contributes to make the event more involving and stimulating.

Over three hundred thousand visits to the monuments are registered every year; at the same time, the number of people participating in the many special projects dedicated to children and adults is impressive.

Thanks to the initiative Taste the city, the event is also a precious opportunity for you to taste Sardinian food and wine specialties along the cultural and artistic itineraries. On top of that, several writers have dedicated original narrations to the event, which are collected in the project Monumenti Aperti Stories. Among them, we can find Michela Murgia, Marcello Fois and Francesco Abate for the 2017 edition.

Click here to find out how Monumenti Aperti began.

The brand Monumenti Aperti is protected by the Ministry of Economic Development and Patent and Trademark Office (certificate no. 0001370749)